I recently discovered the ill fated Werewolf TV series that aired on Fox back in 1987. There was a 2 hour pilot that launched the show that would go on to air 28 half hour episodes before being cancelled in 1988.

The 1980s had lots of cool horror TV shows like Tales from the Darkside, Tales from the Crypt, Monsters, and Freddy's Nightmares just to name a few. Sadly Werewolf got lost in the shuffle it had a different twist on the Werewolf genre, The Werewolves didnt transform because of a full moon but they became aware of their transformation because a pentagram on their palm that was the only signal that the change was approaching. Kinda has a Incredible Hulk TV series feel when Bruce Banner stares at his hand when he is changing into the Hulk. 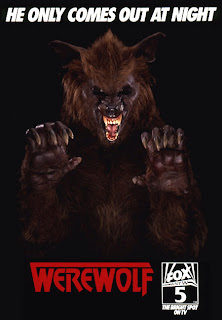 Werewolf centered around a college student named Eric Cord whose roomate is a Werewolf who end up biting Eric passing on the Werewolf disease to him. Show really had some cool special effects for its time. Soundtrack reminds me of Creepshow 2 lots of rock guitar and delayed whammy bar effects, so 1980s. Best parts of the show are the Werewolf vs Werewolf fights. I heard shout factory was going to release this series on DVD but it got cancelled for some reason due to licensing I heard. I hope it finally comes out. The only other Werewolf show right now is Teen Wolf on MTV. 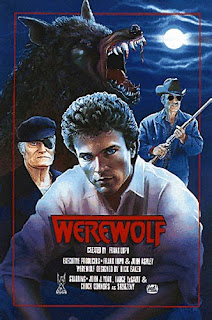