The Conjuring brings the scare

I saw the midnight showing of The Conjuring early this morning. I had low expectations and happy to say the film was very enjoyable. This is one of the best horror films that I've seen since Sinister in 2012. It stars the sexy Vera Ann Farmiga (from Bates Motel show) playing Lorraine Warren, who along with her husband Ed, are experts in demonology that help people who are experiencing paranormal events.

The Conjuring is rated "R" film but has no nudity or graphic language. Too be honest I don't scare easy, but I found the movie very creepy. The one scene of where the mom was thrown down a flight of stairs into a dark basement was a goose-bump moment for me. The Conjuring doesn't rely on gore but suspenseful moments of darkness, silence, creeping doors opening by themselves and those ungodly "bumps in the night". 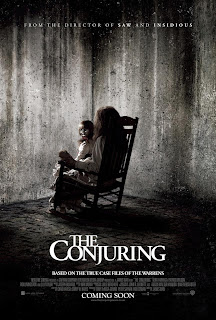 The cast is very good and this helped to make the film one of the better horror films in recent times. James Wan's direction is solid. The film is shot brilliantly. I liked how the film is set in the Fall in October and November seeing fallen leaves adds to the experience.The doll scenes and hanging tree parts were equally spooky.

The possession scene was most disturbing when Ed was performing the exorcism and seeing the mom crawling the under belly of the house trying to kill her own child was insane to say the least.

I definitely recommend this film to anyone who enjoys a more traditional suspenseful horror film.