In the spirit of Creepmas, I'm continuing my blogging about Creepy Scary Christmas Celebrations around the world. First I covered Krampus, now on to the Christmas Witch La Befana brings us to Italy. "SHOP2CoolGhouls" 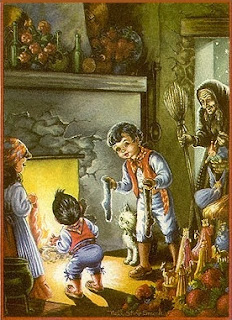 Le Befana or the Witch serves as the Santa Claus equivalent in Italy. She is brings good kids presents and naughty kids coal. Legend has it this character is a hold over from pre Christian pagan celebrations that were later adopted by Christians. Folklore has it Befana was cleaning her house and was visited by the three wise men who asked her to come with them and bring a present for baby Jesus. She declined stating she was to busy with her cleaning chores.  Below is a video story of Le Befana

After mulling over her decision, Befana had a change of heart and decides to go along and follows the men. But she’s too late. She never finds the baby Jesus. Come 6 January, Epiphany, she’s still flying around on her broom, searching. On that day, Italian children leave a glass of wine and food for La Befana "The Witch" much the same way American kids leave Santa milk and cookies. And she, in turn, leaves a present for the children in every house she looks. After all, one of them just might be the baby Jesus. Befana also enters people's home's same way Santa Claus does through the chimney.


There is a cool poem that goes with the Legend of Le Befana,


The Befana comes by night
With her shoes all broken
With a dress in Roman style
Up, up with the Befana !!

She brings ashes and coal
To bad nasty children
To the nice good child
She brings candies and many gifts !

Presently in Italy Le Befana is more popular than ever with Christmas markets and shops selling merchandise such as Dolls, Books with her likeness which is very similar looking to the likeness of witches from Halloween folklore in United States. 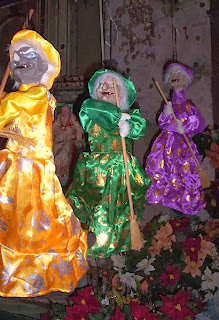