Today I'm continuing on with Creepy Christmas around the world and our next stop is, Wales in Great Britain!

The Mari Lwyd or the Gray Mary is a strange custom where people go from house to house singing carols dressed up as a horse figure with a white cloak like dress and horse skull with eyes lit up with candles carried around on a wooden pole. Its decorated in colorful ribbons and those who dressed up the Gray Mary hope those answering the door would give them food or drink. Those who answered the door were met with singing and challenging battles of rhyming insults in Welsh. At the end of the battle of wits (known as pwnco) the group would be invited into the house for refreshments. It said to bring good luck to those who encountered the group. 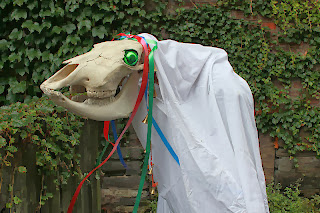 This custom would run from December to January and dates back to the 1800s and was used to mark the passing of the darkest days of Winter. Some might wonder today whats up with all this? But you have to understand for these people back then, winter was a scary time, days were short, nights were long and the cold was brutal. They didn't have central heat, computers, cellphones, you know everything we take for granted today. They simply wanted to pass the time until the warmer days spring. This old tradition died out in many parts of Wales, but some parts still act it out and every December and is becoming more popular in modern times. 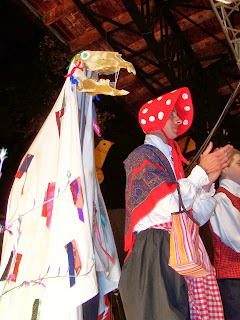