Coming in August 2013, He-man and the Masters of the Universe will collide in a with the Heroes of DC Comics which will include Superman, Wonder Woman, Batman and more. Here is a interview with the author of the upcoming comic. " Shop 2CoolGhouls " 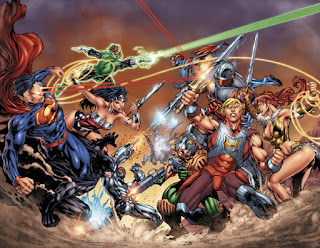 After a long hiatus, Masters of the Universe returns! What are they doing in the DC Universe?

Keith Giffen: Basically, just getting on everybody’s nerves. Culture shock lives! Actually, they’ve come to stop Skeletor from doing to the DCU what he’s always wanted to do to Eternia.
How did Skeletor even GET to Earth?

KG: That’s the great thing about magic. You can do ALL kinds of convenient things with it. By the way, what makes you think Skeletor came to the DCU voluntarily?
Why do the superheroes and MotU see each other as a threat — or at least are at odds with each other?

KG: That seems to be the rule for team-ups; fight, talk, team up. I’m not saying there won’t be conflict between the MOTU and the DCU characters, just that we’re going to try to dodge the obvious cliches.
Whose sword wins in a fight? He-Man’s or Wonder Woman’s?

KG: Teela’s. She’s my favorite to write, so she gets the win. 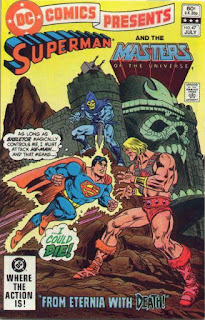