NBC just recently did a featured story on the Haunted House business across the US. Seems like everything year they get bigger and scarier and are staying open past Halloween. The business has definitely grown over the years. "Visit 2CoolGhouls"

Visit NBCNews.com for breaking news, world news, and news about the economy


The haunt industry even has their own convention HauntCon

Over this past month I visited a couple haunts myself as I do every year and I have to say Cutting Edge in Fort Worth, Texas gives the most for your money and it was intense to say the least! Cutting Edge

The glow stick haunted and the zombie drummers were the coolest.  They really cater to one's darkest fears.  There's a scary garment district room that full of clothes on hangers and the lights strobe on and off while ghouls appear in-front of you out of no where. These haunts for me are a lot of fun and certainly an adrenaline rush.  Check out Fangoria America Haunts magazine for some of the best Haunts in America.
#Visit 2CoolGhouls# 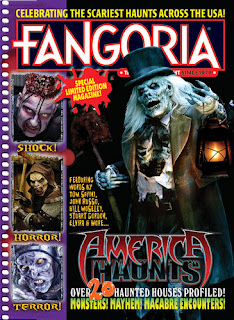