FEARnet CELEBRATES THE NETWORK’S MOST WONDERFUL TIME OF THE YEAR WITH A 24-HOUR ‘TRICK ‘R TREAT’ MARATHON ON HALLOWEEN, PLUS OTHER CREEPY CONFECTIONS IN THE MONTH OF OCTOBER

FEARnet PR
Wednesday, September 26, 2012 - 12:13pm
Highlights Include the Network Debut of the Classic “Tales from the Crypt” Series on Friday, October 5, Broadcast Premieres of ‘Hatchet’ and ‘Splice’ and
World Premieres of ‘Quarantine 2’ and ‘Dolan’s Cadillac ’
Killer Kids, Frightening Fishermen and Nefarious Neighbors Are Taking Over As the “Suburban Horror” Marathon Invades FEARnet on Thursday, October 11
(SANTA MONICA – SEPTEMBER 26, 2012) – Halloween is always in season at FEARnet, but this October the network is going all out with world premieres and petrifying programming leading up to the 24-hour “Trick ‘r Treat” marathon, from 6 a.m. to 6 a.m. ET/3 a.m. to 3 a.m. PT on Halloween.
“This is the only time of year that other networks concentrate on the horror realm, while we do this all year long,” said Sarah Shannon, FEARnet’s director of programming. “So, we put together a schedule that stands out—a month-long bender of some of the best programming we’ve ever had and some of the best features we’ve ever aired. From the world premieres of ‘Quarantine 2’ and ‘Dolan’s Cadillac’, to acquired classic TV shows like ‘Tales from the Crypt’ and ‘The Real Ghostbusters’, there will always be something for fans to watch. Not just all month long, but all year long.”
“Trick ‘r Treat,” the acclaimed horror anthology film starring Anna Paquin (“True Blood”) and Leslie Bibb (“The Midnight Meat Train”), presents four interlocking stories centered around people celebrating—or shunning—the infamous holiday, and the bloody consequences they face for their actions. For the third consecutive year, the fan-favorite 24-hour “Trick ‘r Treat” marathon returns, giving FEARnet fans both old and new, thrills and chills that will last throughout the day.
As always, the marathon will come packed with interstitial content created and produced exclusively for the network by the film’s writer/director, Mike Dougherty. These special features include “Season’s Greetings,” the original short film that spawned “Trick ‘r Treat,” starring “Trick ‘r Treat”’s beloved Sam; Fathers’ Day, Easter and back-to-school shorts, also starring Sam; and vignettes explaining the four key rules of Halloween: Always wear a costume, always pass out treats, never blow out your Jack O’Lantern before midnight, and always check your candy. “Trick ‘r Treat” is the perfect complement to the Halloween festivities, and FEARnet is the only place you can watch it.
Things get mischievous on Tuesday, October 30, when FEARnet takes a trip to “Psychoville” in honor of Mischief Day. Created by British comedy royalty, Reece Shearsmith and Steve Pemberton, “Psychoville” follows the twisted exploits of David Sowerbutts, Mr. Jelly, Oscar Lomax, Joy Aston and Robert Greenspan, a group of strangers who are each being blackmailed for various dark deeds. The all-day marathon will run from 4 p.m. to 4 a.m. ET/ 1p.m. to 1 a.m. PT, and will feature every episode of the hit BBC series, including the Halloween special.
The programming lineup is stocked full of premieres this month, with the world premieres of “Dolan’s Cadillac,” on Sunday, October 21 at 10 p.m. ET/7 p.m. PT, based on the Stephen King novella and starring Christian Slater (“Alone in the Dark”) as Jimmy Dolan, a sadistic human trafficker, and Wes Bentley (“The Hunger Games”) as Robinson, a school teacher seeking vengeance for the murder of his wife; and “Quarantine 2: Terminal,” the sequel to 2008’s found footage smash hit, “Quarantine,” on Sunday, October 28 at 8 p.m. ET/5 p.m. PT.
And FEARnet will be rolling out the broadcast premiere of the modern cult classic, “Hatchet,” on Sunday, October 14 at 12 a.m. ET/9 p.m. PT. Written and directed by Adam Green (“Holliston”) and starring genre icons Tony Todd (“Candyman”) and Kane Hodder (“Jason Goes To Hell”), “Hatchet” puts a classic twist on the slasher trend, and ushers in a return to old school American horror. The broadcast premiere of the hit sci-fi thriller, “Splice,” starring Adrian Brody (“Predators”), and the network premiere of “The Stepfather,” starring Dylan Walsh (“Nip/Tuck”), will be unveiled this month, as well.
FEARnet fans will be looking for a new real estate agent, when the “Suburban Horror” marathon moves in next door with seven sinister films on Thursday, October 11 from 2 p.m. to 4 a.m. ET/11 a.m. to 1 a.m. PT. The lineup begins with “I Still Know What You Did Last Summer,” and features such classic backyard terrors as “The Burbs,” starring Tom Hanks (“He Knows You’re Alone”) as a nosy man who gets more than he bargained for when he investigates his strange new neighbors; “Idle Hands,” starring Devon Sawa (“Final Destination”) as a teenage slacker who becomes the devil’s plaything; and “Home Movie,” starring Adrian Pasdar (“Near Dark”) as a pastor with two young children who are anything but holy.
Additionally, as previously announced, FEARnet is proud to present the network debut of the Emmy Award-winning anthology horror series “Tales from the Crypt” on Friday, October 5, at 10 p.m. ET/7 p.m. PT. The TV versions of the groundbreaking program air on the linear channel, while the original episodes available on the VOD platform. This marks the first time that “Tales from the Crypt” can be seen on network TV since 2004, when it was previously syndicated. 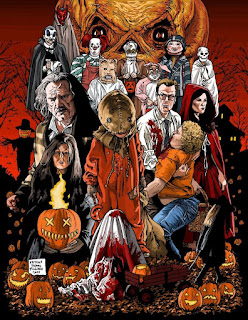